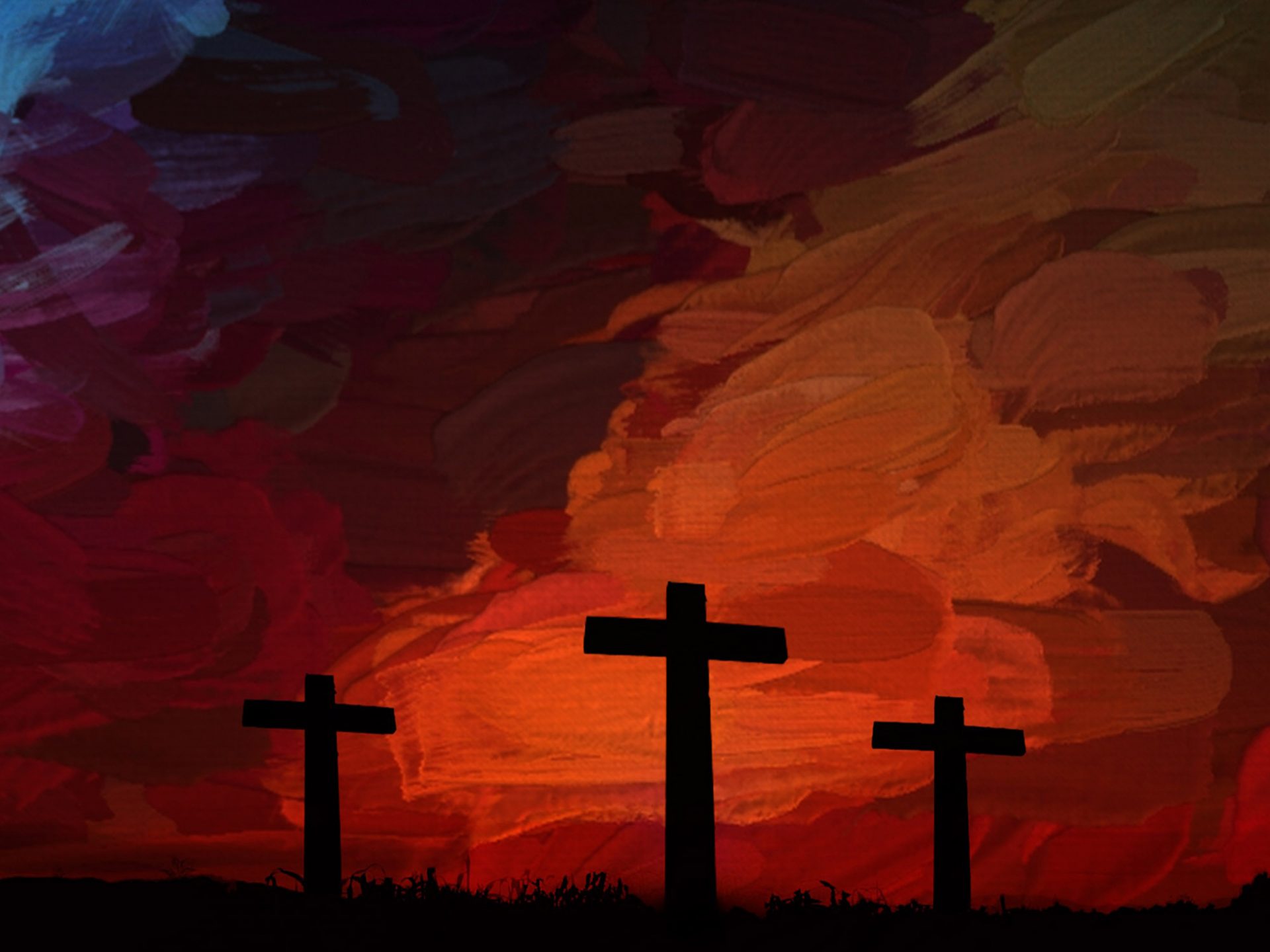 “Father, forgive them, for they know not what they do.”

What we see today as a beautiful cross, an expression of religious art set in precious metals or stained glass, was a sign in Jesus’s day of wickedness, punishment, and judgment. The cross meant humiliation and prolonged suffering, torture, and shame.

Jesus carried the massive top beam, weighing about a hundred pounds, on his shoulders as he marched to his death. Sleepless, beaten, and frail, he fell under its weight. Soldiers seized a nearby man, Simon of Cyrene, who was likely in town for Passover. They forced him to help a different Passover sacrifice, Jesus, carry his beam up a hill of death.

Jesus, the Nazarene, went to Golgotha, the place of the skull. Naked, he was laid down on the wood. Large nails, like railroad spikes, were pressed against his skin. A soldier raised a hammer. Blow fell again, and again, one after another, rupturing wrists and feet, exploding nerves, binding Jesus in place. Can you imagine how that felt?

When you died on a cross, it was not from bleeding to death. Death on a cross came slowly, from asphyxiation. Every time a crucified person took a breath, he would have to lift himself up by the nails pressing down on wounds, stressing bones and tendons and ligaments. Nerves would detonate with pain. Air would fill lungs and then, in exhaustion, the crucified would fall back on those same nails holding him up. Up and down, up and down they went. This could go on for days. To speed up the process, soldiers would break the legs of the crucified so they could not get any more air to breathe. So Good Friday went: Jesus gasping for air, pain in the wounds, gasping for air, and pain in the wounds, on and on and on and on, until he saw his final breath. Exhausted, abused, hungry, and choking, he gave up his life.

Why? Why would the Son of God suffer excruciating misery? I think we can answer that question best by exploring each phrase he uttered. The first thing he said on the cross was a prayer for the Father to forgive the very people who were killing him. Why? The injustice, the atrocity, the insanity of that pivotal moment in history—yet, he spoke a word of clemency? His breath did not come cheaply. He choked those words out. Why would he spend a breath asking his Father to forgive, of all people, those executioners?

To answer that question, let us look at what Jesus had earlier said about forgiveness. In his ministry, he talked about it dozens of times. I think he did so because people carry loads of guilt, shame, bitterness, and hurt. People regret things from decades past and often run from it all. People need forgiveness.

At the same time, people hold onto grudges. They shut down paths of peace, and embrace generational feuds. Some avoid church because of guilt, while others switch churches because they would rather start over than forgive. People make jokes, tell lies, and brainwash themselves into thinking they are fine, or events never happened or if they did, they are not that big of a deal. However, people don’t really move on, they just bury their problems. As a pastor, I see it and hear this regularly. People come up with do-it-yourself solutions to their hurt and sin, and miss God’s remedy.

Jesus confronts our attempts to fix ourselves and presents the only path of peace. We see the first hint of this in Jesus’s teaching at the Sermon on the Mount. He taught that our attitude toward other people indicates our understanding of God’s forgiveness. He said, “For if you forgive others their trespasses, your heavenly Father will also forgive you, but if you do not forgive others their trespasses, neither will your Father forgive your trespasses” (Matthew 6:14–15). Not only do we need forgiveness, we need to learn to offer it.

This can seem impossible. However, Jesus says more is at stake than we may know when we refuse to forgive. God’s forgiveness is connected to ours. Jesus taught that God will hold us to the standard we hold others. He wants us to be merciful, kind, and forgiving as God is. He wants us to let go of bitterness, anger, and grudges. How?

Forgiveness does not come easy or naturally. How can we forgive as we have been forgiven? In the abstract, Jesus’s teaching seems simple. It is easy to be forgiving if it is merely words. However, how do we forgive when we have been blindsided by injustice?

Think about real wrongs done to you. How do you obey Jesus in light of those? How do we comply with Jesus’s teaching or even come close to his example? We know how important forgiveness is, but when we are swimming in pain, this call to forgive can seem insurmountable.

Happily, Jesus’s teaching on and his example of forgiveness did not end with a sermon. As we explore further, he explains how we can love our enemies to the point of even offering them forgiveness.

Peter, the disciple, heard Jesus’s teaching, and it confused him. He asked Jesus how often a person should forgive. Maybe there is a limit, or a point where people just exhaust forgiveness? To Peter’s chagrin, Jesus basically answered that if a person repents (turns away from his or her sin), forgive him every time. Literally, he said “seventy times seven.” That was more than a three-strikes-and-you’re-out policy. In a parallel account Jesus says if the offender sins and repents seven times in a single day, forgive every time (Luke 17:4).

Every time? How in the world can we offer forgiveness to what looks like a half-hearted apology? Are we really going to think they mean what they say after the third time? They probably are going to just sin again, don’t you think?

Jesus responds to this question about forgiveness with a wonderful story. He tells a tale of a servant who had an astronomical debt. The servant came to his king and asked for relief. What did the king do? He released him of his obligation. Simple and astounding, that huge debt was forgiven. Not too long afterward, that same servant ran into a man who owed him a comparable pittance. The man could not pay. Furious, the servant had his debtor thrown into prison. News traveled fast. The king heard about this turn of events and called the servant back.

Hear what words Jesus has the king speak:

“You wicked servant! I forgave you all that debt because you pleaded with me. And should not you have had mercy on your fellow servant, as I had mercy on you?” And in anger his master delivered him to the jailers, until he should pay all his debt. So also my heavenly Father will do to every one of you, if you do not forgive your brother from your heart.”

The point is clear: we must understand the spiritual debt God has forgiven us. This should aid us in forgiving the debt others owe us. That is how we can obey Jesus’s teaching. Understanding the sin originally forgiven us gives us the power to extend mercy to those who wrong us and make a poor attempt to get right. If we have been forgiven a million dollars in debt, then remembering whose turn it is to pay for lunch is not as important. The key is perspective.

Jesus beautifully illustrated the importance of this perspective again at the home of a Pharisee named Simon. Everyone was eating and having a grand old time. A woman of the city entered. She took some expensive perfume and started anointing Jesus and wiping his feet with her hair and tears. The host was beside himself. She had barged into his home and threw herself on his guest. This woman was presumably known for her loose living, hence Simon’s revulsion. Add to that, the grassroots religious superstar didn’t show any reservation with this over-the-top affection. Addressing Simon’s thoughts with a lesson, Jesus said:

“A certain moneylender had two debtors. One owed five hundred denarii, and the other fifty. When they could not pay, he cancelled the debt of both. Now which of them will love him more?” Simon answered, “The one, I suppose, for whom he cancelled the larger debt.” And he said to him, “You have judged rightly.” Then turning toward the woman he said to Simon, “Do you see this woman? I entered your house; you gave me no water for my feet, but she has wet my feet with her tears and wiped them with her hair. You gave me no kiss, but from the time I came in she has not ceased to kiss my feet. You did not anoint my head with oil, but she has anointed my feet with ointment. Therefore I tell you, her sins, which are many, are forgiven—for she loved much. But he who is forgiven little, loves little.” And he said to her, “Your sins are forgiven.”

He who is forgiven little, loves little. Forgiveness was personal and specific in Jesus’s day, as in ours. Jesus forgave this woman her sin against God. This audacious assertion and ability shocked the dinner party, but even more stunning was the key to forgiveness he taught here. We can become people of gratitude and love amidst our hurt and pain. Jesus says those who have a tangible understanding of their forgiven spiritual debt become more attuned to gratitude and love. That makes sense. The woman obviously is so much more appreciative of Jesus than Simon. The forgiven sinner has a better perspective of Jesus than the religious leader.

Have you experienced forgiveness from a friend or family member and seen how it healed the relationship? Have you been overwhelmed by God’s love and forgiveness? Have you wept tears of appreciation and contrition? This woman had.

Maybe you find yourself relating to Simon. You don’t feel like you have been that bad or need forgiveness. Maybe you find it easy to look down on others. Remember the story of the unmerciful servant. Paul taught in 2 Corinthians 5:14, “The love of Christ controls us.” Some versions translate the word for control as “compels.” The love of Christ compels us. The rocket fuel for forgiving others is a keen awareness of our own forgiven debt. How do we forgive when it is hard? We must move toward the perspective of the forgiven. We must see ourselves as we are.

Excerpted from Last Words: Seven Saying from the Heart of Christ on the Cross © 2020 by Robert J. Nash. May not be reproduced without prior written permission.

LAST WORDS: SEVEN SAYINGS FROM THE HEART OF CHRIST ON THE CROSS

In this powerful book, author Robert J. Nash explores a fresh perspective on a familiar event, guiding readers into the forgiveness, hope, comfort, and compassion of Christ’s words in his final moments on earth.

Robert J. Nash, MDiv, serves as a pastor at Sawyer Highlands Church in Southwest Michigan and is the author of Last Words: Seven Sayings from the Heart of Christ on the Cross. He is married with six kids and enjoys teaching, reading, running, and traveling with his family. Learn more at robertjnash.com. 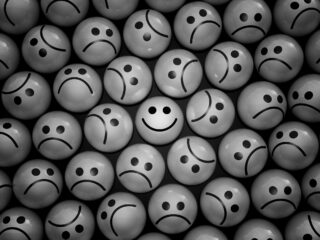